I was trying decide whether to see The Monuments Men in theaters, or simply wait for the Blu-ray. On the one hand, it has a tremendous cast and features some of my favorite actors, but reviews have been generally negative. I eventually chose to make up my own mind.

I'm still not sure if that was a good decision.

The movie is based on a true story, and tells the tale of how a small group of men were charged with the task of recovering artwork stolen by the Nazi's during World War II. I'm tired of stories about Nazi's, but I have a lot of respect for people who fought and still fight for our freedom. Art should be for everyone and I had not heard this story before, so I have to admit that I had high hopes for the movie. 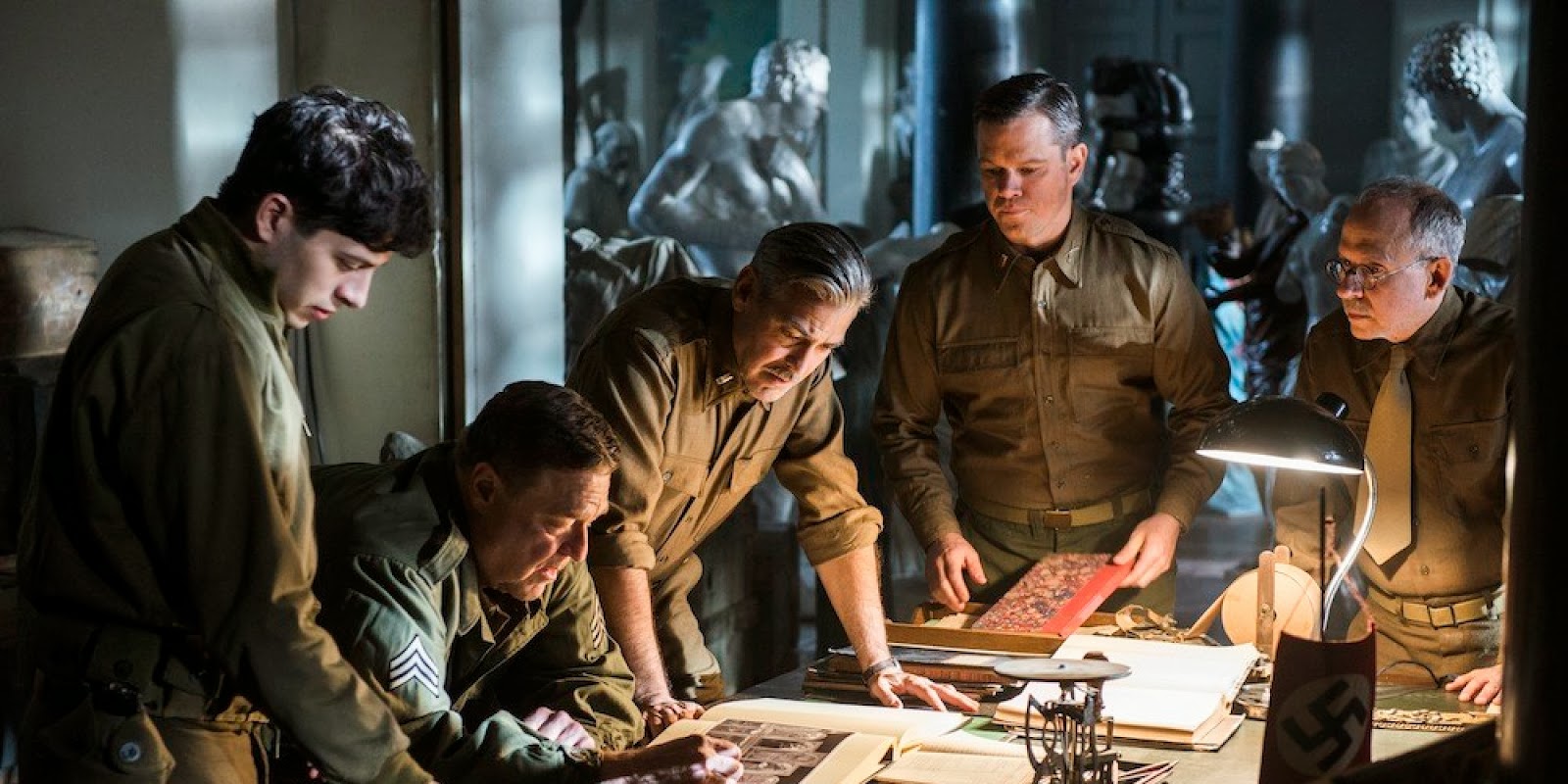 Nobody from the talented cast dominated the story. This was a true ensemble piece with screen time being shared. We are shown a recruiting stage, a planning stage, and then the attempted execution of those plans. Unfortunately, the drama doesn't really build in an effective way. In fact, I'm not certain what the movie was trying to be. There were frequent moments of comedy, interspersed with mystery, brief action, and adventure elements. With all of these important works of art at stake, I somehow failed to be completely invested in the story.

It's hard to pinpoint why it fell flat for me. I rather enjoyed the performances of the principal actors, but I didn't feel much tension during the search, or triumph when works of art were recovered. 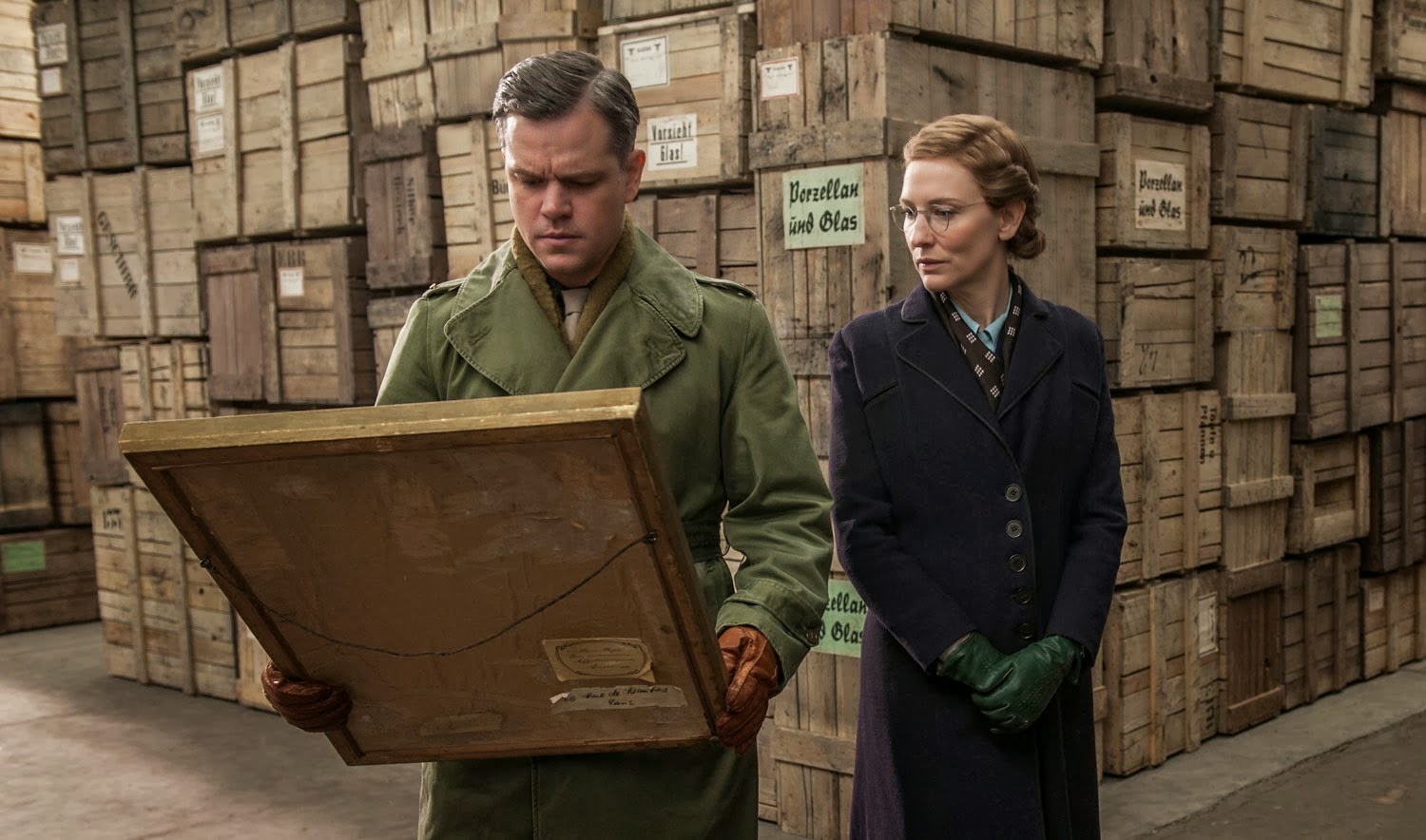 The closing credits showed photographs of the real heroes who were involved in the mission 70 years ago.

The most memorable character was James Granger (Matt Damon), who interacted in an important way with Parisian museum curator, Claire Simone (Cate Blanchett), to uncover vital information for the mission. Blanchett's character was based on Rose Valland.

The Monuments Men is an important and heroic story which meanders along without ever becoming riveting. I would watch it again, but I don't think I need to own it.

Return to index of every review on the site.
Posted by Steve Aldersley at 4:50 PM No comments: 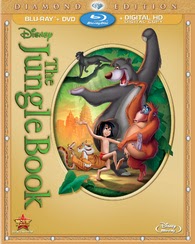 Although Bambi, Dumbo and Lady and the Tramp are my favorite classic Disney titles, The Jungle Book holds a special place in my heart. My mother took me and my brother to see it on the big screen shortly before she died, and it was the only animated Disney film we saw together at the cinema. I remember that we were late and missed a few minutes, so we watched the rest of the film, Treasure Island, and then sat through all of The Jungle Book again afterwards. I only asked to see the few minutes we had missed, but we couldn't bring ourselves to leave at that point.

I don't think I have seen the film since that day around 40 years ago, so I wondered whether my treasured memory would be ruined by seeing it again as an adult. I'm happy to say that I thoroughly enjoyed the experience.

Walt Disney's last major animated film is a feel-good story suitable for the whole family. The story is simple: Mowgli is a small child who is discovered by Bagheera the panther in the Indian Jungle. After giving the matter some thought, he decides that the local wolves would provide the best home for the boy. Ten years quickly pass during a narrated scene and we skip ahead to the current day. The wolves have heard that the tiger, Shere Khan, is back in the neighborhood. He hates humans and will likely seek out Mowgli to kill him. Don't worry, I promise that your children won't be frightened by the story.

Mowgli is befriended by a small elephant, and also has the help of Bagheera, who decides to deliver the boy to a village so that he can be among his own kind. Along the way they encounter Baloo the bear, who is the life and soul of the film. He's not too bright, but his heart is in the right place and it's easy to love him. 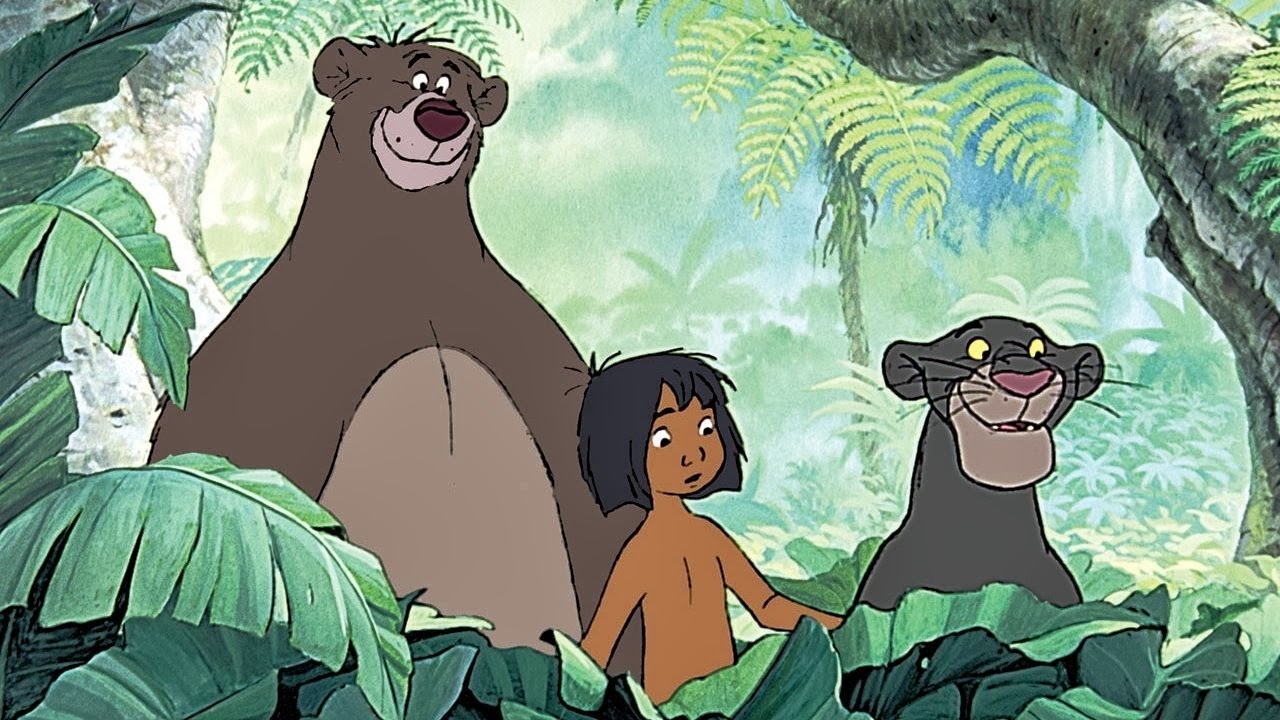 Like most Disney classics, the story contains plenty of songs. The most notable is Bare Necessities, sung by Baloo, and it was nominated for an Oscar. There are four other songs, including King of the Swingers, which is almost as much fun as Bare Necessities.

The 78-minute story seems to be over all too quickly, but you could always watch it twice as I did all those years ago. I could imagine small children loving the colors, the music, and the bright characters that populate the entire movie.

The Diamond Edition  Blu-ray boasts a 7.1 DTS-HD Master Audio track, as well as the original mono track, and 5.1 Dolby Digital versions in French, Spanish and Portuguese. The picture is free of dirt and debris and looks as clear as a watercolor painting could possibly look. Be aware that these hand-painted Disney classics do not have the depth of modern CGI images, but the story is strong enough to make you focus on what's happening in the foreground. I was very happy with the presentation.

As well as features from the Classic DVD, this latest version includes the following:

Music, Memories and Mowgli: A Conversation with Richard M. Sherman, Diane Disney Miller and Floyd Norman (9:42)
Alternate Ending - Mowgli and the Hunter (unfinished animation in storyboard form) (8:46)
I Wan'na Be Like You: Hanging Out at Disney's Magic Kingdom (18:25)
Bear-e-oke (5 songs)
@disneyanimation: Sparking Creativity (9:14)

The package comes with an embossed slip cover and a DVD.

For any Disney fan who hasn't seen The Jungle Book, the Blu-ray is a great way to experience it for the first time. I would also recommend it as an upgrade for owners of the DVD.

Return to index of every review on the site.
Posted by Steve Aldersley at 9:17 PM No comments: 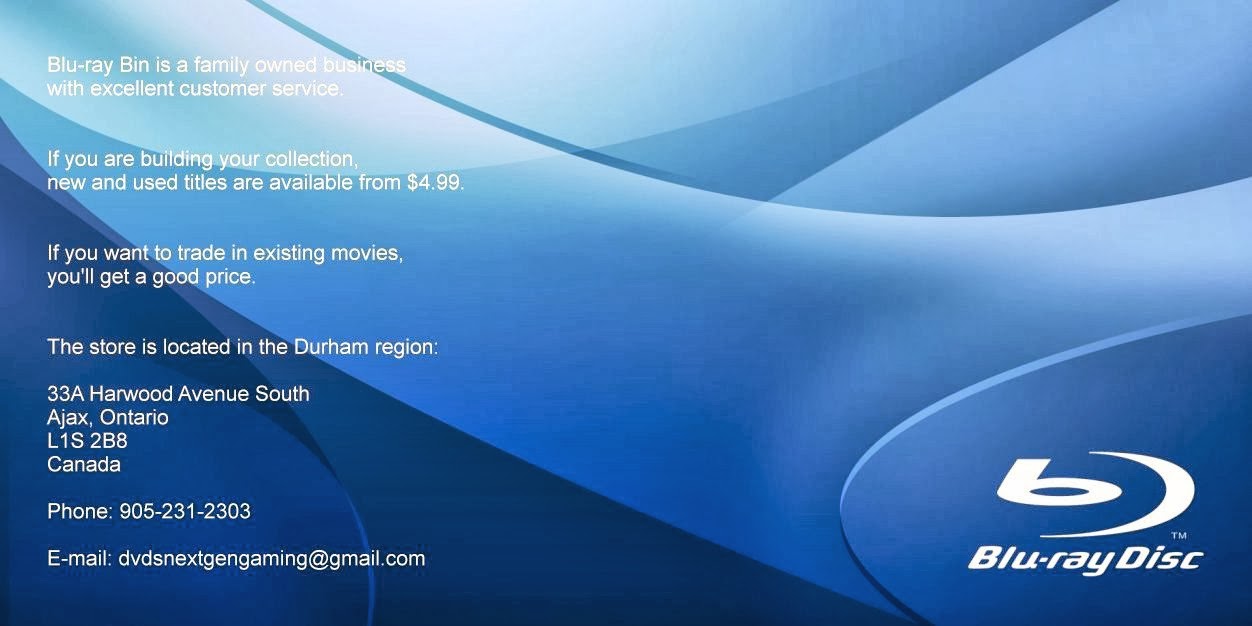 Here are the latest Used 1-Disc/Used additions from Blu-ray Bin:

Used items come with cases and original artwork and are 100 percent guaranteed.
Posted by Steve Aldersley at 11:49 AM No comments:

I was apprehensive attending the Saturday morning showing of Jason Reitman's Labor Day. Although I almost always avoid reviews and trailers when I am certain I will see a movie, I had heard the mostly negative buzz for Reitman's fifth movie. I also knew that this wouldn't contain the humor that I loved in Thank You for Smoking, Juno, Up in the Air and Young Adult. In short, I was afraid that Reitman's perfect record would be broken, but in my mind at least, he's still batting a thousand. If you're a Reitman fan, I urge you to stop reading until you have seen the movie. It's impossible to talk about it without giving away significant plot points.

For those of you who are undecided, I'm not going to mention anything that isn't revealed in the trailer.


Adele (Kate Winslet) plays a single mother who lives with her son, Henry (Gattlin Griffith). Her former husband had a child with another woman and Adele struggles to cope with depression and social anxiety. She barely leaves the house, shopping just once a month for supplies from the local store. It might be difficult to understand this condition if you have never suffered from it. Some days are good, and it's possible to talk to a total stranger; other days are difficult, and the slightest trigger can result in a surge of panic. This fight or flight feeling can be overwhelming, and, as a coping technique, those who suffer from anxiety run through every possible scenario before facing the world. 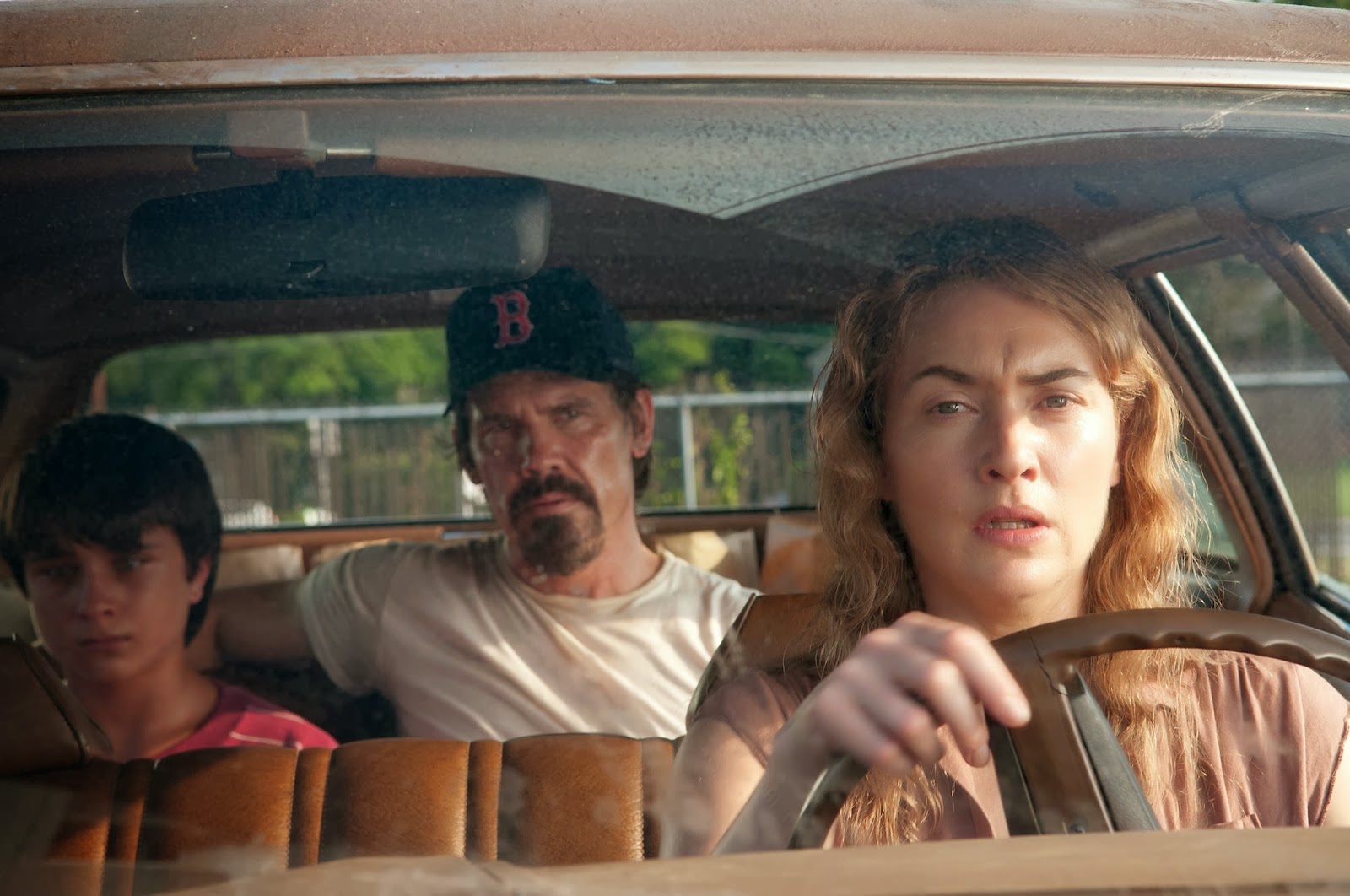 You can imagine Adele's horror when Henry introduces her to Frank (Josh Brolin), who just met him in the store and asked for a ride. I can imagine Adele wondering how to extract herself from the situation without upsetting her son. Does Frank look safe, or could he turn out to be dangerous? Frank more or less insists that Adele help him, and then demands to be driven to her home. He's an escaped convict.

This is not the Reitman that we have come to know and love. Make no mistake, Labor Day is a drama. It plays out somewhat like a Hitchcock movie, but instead of seeing things from the viewpoint of the man on the run, we see things through the eyes of Adele and Henry. Frank just wants to rest for a while and says that he will leave that night by train, but Labor Day weekend is approaching and the trains aren't running. 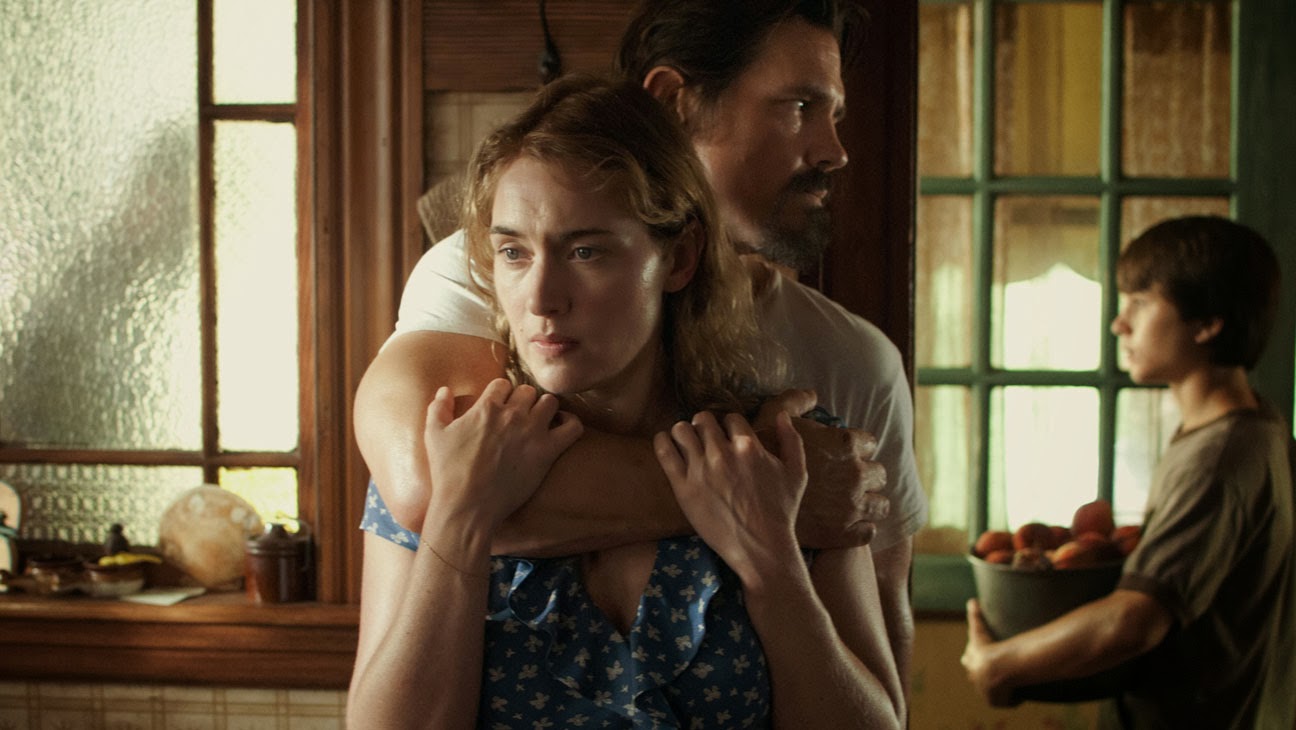 The story is set in 1987, and the narration is handled by Tobey Maguire, who also shows up later in the story as an adult version of Henry. If you're planning to see this movie because Maguire is involved, his role is fairly minor. This is all about the interaction between Adele and Frank, and how it impacts Henry. The acting is superb, and Winslet thoroughly deserved her Golden Globe nomination.

As the trailer shows, this film isn't a traditional crime drama. Adele has missed her husband and Frank doesn't seem all that threatening. The news bulletins say that he is a murderer serving 18 years, but he insists that things didn't happen the way they were described on TV. We eventually learn the truth through flashbacks, but I won't talk about that here. We are also shown more of Adele's past, and come to understand some of the things that trigger her anxiety. These troubled people find that they like each other, and both Adele and Henry seem content to have Frank around. Instead of treating them as prisoners, he even fixes things around the house. 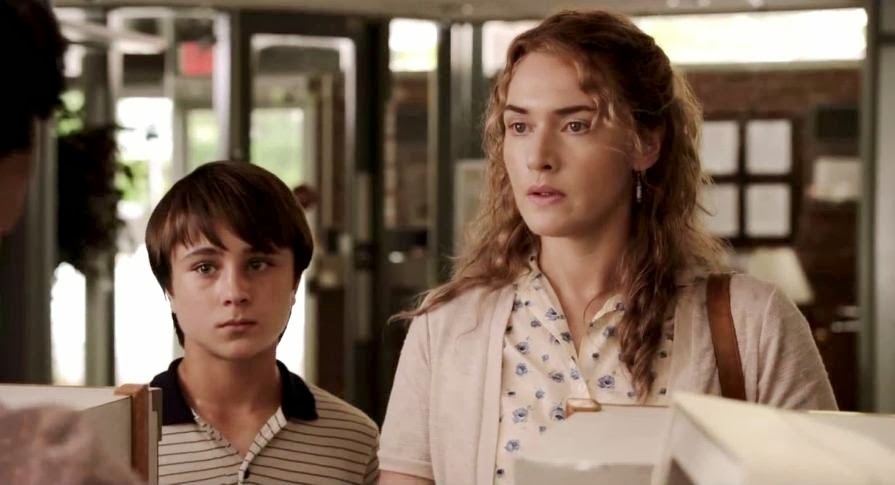 I found myself actually rooting for Frank to escape and it reminded me of Roger Ebert's comments about the scene in Psycho where we wanted the car to sink into the water when Norman Bates was hiding it. I keep mentioning Hitchcock because tension and suspense is present throughout the film. I think I was engrossed in the story for every single moment of the 111 minutes.

So why are the reviews so negative? Is the story unrealistic? Not to me. Is the ending contrived or weak? I certainly didn't think so. I was never bored and the resolution wasn't immediately obvious. The actors didn't put a foot wrong either. Were people disappointed by the lack of Reitman's established formula? I really don't know why the reviews are so bad. I can assure you that I would echo those opinions if the same were true for me, but I loved Labor Day. The score was subtle and effective, the pacing good, and the atmosphere just right.

The only difficult thing is deciding whether to give the film 4.5 or 5 stars, and I think it deserves a 5. If you like Reitman at all, please give this a chance and make up your own mind. I'm delighted that I did.

Posted by Steve Aldersley at 12:11 PM No comments: