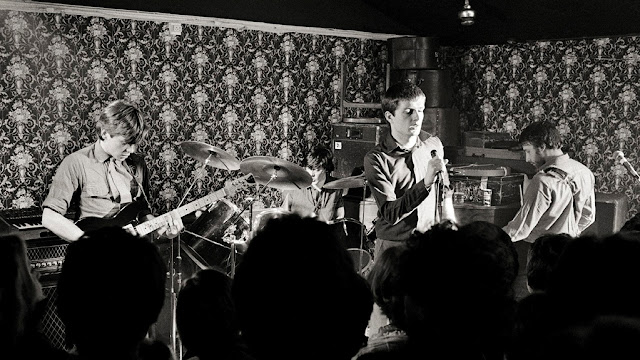 Joy Division formed in 1976 as Warsaw, releasing an album of the same name. I considered all of those songs for the purposes of this playlist. The band's sound started as something that would slot neatly into the punk category, but evolved into a dark and majestic thing that I had never heard before. Interpol did a pretty good job of revisiting that style on their early albums, but I believe Joy Division to be in a league of their own.

Ian Curtis was the lead singer and most of the songs dealt with what he was feeling when he was in love with two different women. Other songs touch on such joyous subjects as epilepsy. I know a lot of people who think that Joy Division's music would be a good choice if you were planning on slitting your wrists, but I can't agree. This music just soars, despite the rough edges of Curtis' vocals. Peter Hook's bass is an essential element of the music and some songs feature bass leads. Bernard Sumner (guitar/keyboards) and Stephen Morris (drums) complete the lineup.

For a band named after a Nazi brothel, with a lead singer who committed suicide, I find Joy Division's music surprisingly uplifting. The sound is so dense and layered. If you check out the excellent movie, Control, you'll almost certainly appreciate the music even more. These songs are about real things that mattered enormously to Curtis.

With just two studio albums (plus Warsaw), compilations and live releases, we were robbed of what was at the time, a unique sound. As with all great artists, I find myself wondering what they would have produced had they been around much longer.

I would urge any fan to go and hear Peter Hook and the Light perform these incredible songs. It's as close as you're going to get to the original sound if you weren't around at the time. I was at an Unknown Pleasures show a few years ago and every hair was standing on end. I'm hoping that Peter Hook will play Closer in Toronto before I die, but I'll be there this November for Substance.

So let's get to the playlist. The order wasn't obvious for this one because with just two studio albums, you'll expect to hear the songs in the order from the album. I've created this with a live show in mind, with the last four tracks being the encore. If you're a fan, I would love to know what you think. Here's my YouTube playlist of these 20 songs.

Return to index of every review on the site.
Posted by Steve Aldersley at 7:11 PM