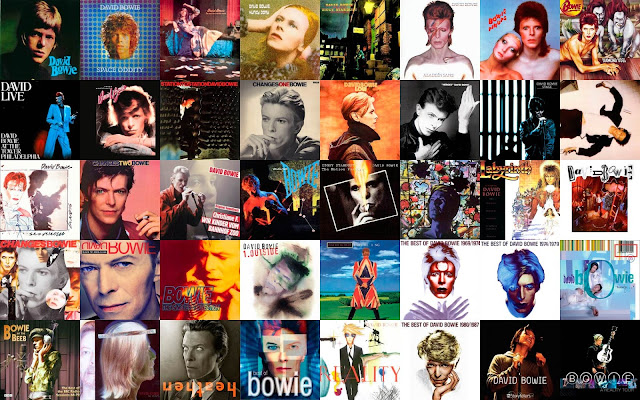 
Has there ever been a musician that has changed identity more often or more successfully than David Bowie? Instead of my usual concert photo, I've borrowed the above album collage from TheSource.com to illustrate those many phases. Even if you are not a fan, you have to admit that it's pretty cool. Bowie remained original up to and including his final album release.

I was wary of featuring David Bowie in this Ultimate Playlist series because of the flood of material that appeared following his death in January. However, he has impacted my life in a lot of ways and I didn't want to omit him.

When I was a kid, with my musical tastes dominated by glam, novelty records, and all manner of embarrassing things, Bowie's music captured my attention like nothing ever had. Hey, I was 12 or 13, so give me a break! I remember playing Hunky Dory and Aladdin Sane at my neighbor's house after buying them from a store my grandfather ran. I credit Bowie with being the first 'proper' artist I ever became obsessed with.

My grandmother was curious about my obsession and made an attempt to understand it. I have fond memories of her reading the lyrics to Hunky Dory. I have a sneaking suspicion that she imagined that Kooks could have been written about her and my grandfather.

I distinctly remember anticipating the release of Low. It was the first time I was ahead of the curve and not just reacting to existing music. When it finally arrived, I wondered why Bowie had included so many instrumental synthesizer tracks on the second side - a trend that continued with the release of Heroes - but I adjusted and regard those albums as two of his best releases.


I had a lot of trouble choosing just 20 songs for this list. Part of me wanted to showcase tracks that might have been overlooked by the casual fan. For example, I was desperate to include Cygnet Committee, but I couldn't leave out any of my final 20. Soul Love was another hard one to cut, perhaps because of my grandmother. So I have decided to list the 17 songs that just failed to make the cut. Here they are, in alphabetical order:

I am sure that there will be many readers who will look at the above list and at my final 20 and think that I have omitted some of the best songs Bowie ever produced. That's how strong his catalogue is. But I hope that you will at least respect my choices, even if you are outraged at some of the omissions.

As for favorite albums, I would mention The Man Who Sold the World, Heroes, Hunky Dory, Low and Outside. That's not to say that most of the others don't contain songs that you simply need to hear. I'm sure a lot of fans would put Ziggy Stardust and Aladdin Sane close to the top of their list, while others would choose Let's Dance or Young Americans. My closest friend would probably ask me where the hell Earthling was and why I haven't included anything from that. One of the biggest surprises I had regarding Bowie was listening to Outside. It was such an unexpected return to the sound I adored, but also updated in a weird and wonderful kind of way. I must have seen 10 concerts on that tour.

Anyway, before I completely lose your interest, here is my Ultimate Playlist for Mr. David Bowie, along with a link to my YouTube playlist:

Posted by Steve Aldersley at 1:11 PM